Geeta Rao Gupta (born 1956 in Mumbai, India) is a leader on gender, women’s issues, and HIV/AIDS. She is frequently consulted on issues related to AIDS prevention and women’s vulnerability to HIV and is an advocate for women’s economic and social empowerment to fight disease, poverty and hunger. Rao Gupta is former president of the International Center for Research on Women (ICRW). She began working with ICRW in 1988 as a consultant, researcher, and officer, and headed the private, non-profit organization based in Washington, D.C. from 1997 through April 2010. She stepped down to join the Bill & Melinda Gates Foundation as a senior fellow. Currently she serves as Deputy Executive Director for UNICEF and the Vice Chair of the Board for the GAVI Alliance. She was appointed to this position by the United Nations Secretary-General Ban Ki-moon on 18 April 2011. 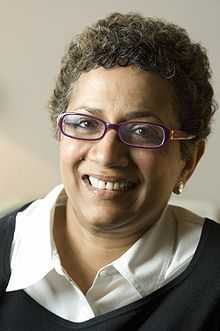 There are 41 million people who do not have access to a toilet in Pakistan and as a result they are defecating in the open. And open defecation has significant health and nutritional consequences.

With engaging prose, Engelman takes readers on a delightful journey?that both entertains and educates ? of modern civilization and women's central role to ensuring the economic and social well-being of their families, communities, nations and the global community.