General Maxwell Davenport "Max" Taylor (August 26, 1901 – April 19, 1987) was a senior United States Army officer and diplomat of the mid-20th century. He served with distinction in World War II, most notably as commander of the 101st Airborne Division, nicknamed "The Screaming Eagles". After the war he served as the fifth Chairman of the Joint Chiefs of Staff, having been appointed by President John Kennedy. He is the father of biographer and historian John Maxwell Taylor and military historian and author Thomas Taylor. 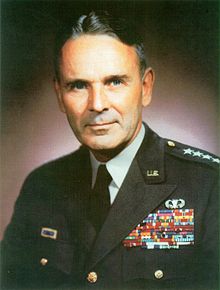 “Unless you are prepared to use our planes to knock out Cuban planes, then you shouldn't have started the thing in the first place.”

“When I began to use my cricket, the first man I met in the darkness I thought was a German until he cricketed. We threw our arms around each other, and from that moment I knew we had won the war.”