John Royer "Jack" Garman (September 11, 1944 – September 20, 2016) was a computer engineer, former senior NASA executive and a noted key figure of the Apollo 11 lunar landing. As a young specialist on duty during the final descent stage on 20 July 1969 he dealt with a series of computer alarms which could have caused the mission to be aborted. 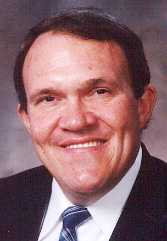 “A simple philosophy to stick to would be that religion and the promotion of religious opinion is none of the government's business. Congress can make "no law" respecting an establishment of religion. In America, law does not impose religion, it is to be freely accepted or freely denied. Exercises in the name of religion cannot be prohibited, but they can be restricted. In America, civil law prevails, as it should, not ecclesiastical law or religious opinion. Religion is a matter of opinion. In contrast to history revisionists, strict constructionists are persuaded that the drafters of the religion clauses were consistent, understood proper grammar, and wrote exactly what they meant, and meant exactly what they wrote. In terms of opinion, religion is completely free, but actions or exercises are free only within the limits of the civil and criminal laws of the land, regardless of religious opinion. Religion, however you choose to define it, is not above the law. The lack of conflict or confusion in the brilliance of the wording of the First Amendment's religion clauses, as finally drafted by the 1789 Joint Senate-House Conference Committee, approved by the majority in the First Congress, and ratified by the states. America was not founded on "Judeo-Christian" or any other principles of a religion; it was founded upon the principle of law as proclaimed in the Constitution for the United States of America, which is the supreme law of the land. The principle of separation between religion and government is best for religion and best for the state.”