Raymond Eugene "Gene" Green (born October 17, 1947) is the U.S. Representative for Texas's 29th congressional district, serving since 1993. He is a member of the Democratic Party. The district includes most of eastern Houston, along with large portions of Houston's eastern suburbs. 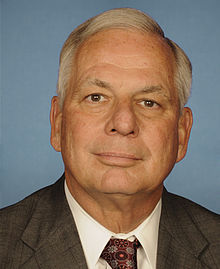 Every citizen's vote should count in America, not just the votes of partisan insiders in the Electoral College. The Electoral College was necessary when communications were poor, literacy was low and voters lacked information about out-of-state figures, which is clearly no longer the case.

“I voted for the bill before I voted against the bill. I didn't want to be the Lone Ranger.”

“U.S. 90 is a major east and western thoroughfare freeway for the East Harris County region, but its true regional mobility potential cannot be reached unless the freeway links up directly with the interstate system through I-10.”

“It is so important for our side of the county,”

“If they are going to compete, ... then they need to compete on the whole playing field.”

“the government is responding.”

“Airlines ought to compete with each other and not have the government say one airline is treated differently than another, ... That is the problem I have with this bill. It looks like it would help Northwest but doesn't help a carrier like Continental.”