Vincent Eugene Craddock (February 11, 1935 – October 12, 1971), known as Gene Vincent, was an American musician who pioneered the styles of rock and roll and rockabilly. His 1956 top ten hit with his Blue Caps, "Be-Bop-A-Lula", is considered a significant early example of rockabilly. He was inducted into the Rock and Roll Hall of Fame and the Rockabilly Hall of Fame. 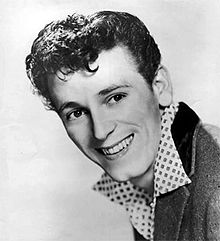 Well I took her over to a soda fountain over on Bo's She had an Ice Cream Sundae and a hot cup of Jo She leaned way back just to straighten up her hose Well the ice cream melted and the coffee froze.

Flea brain, got a hole in her head. If she wasn't good looking, she'd be better off dead.

She's the gal in the red blue jeans.

“While I was in the U.S. Navy I was a crack marksman. I have a collection of guns at home in New Mexico and the guns in this case were given to me by friends in Germany for that collection. I guess I just brandished one in a moment of temper.”

“I'm a crack shot and I've won medals for shooting. But I don't think I could shoot a person.”

I hope my fans remember my name is Gene Vincent and not Gene Autry.