Charles Albert "Chuck" Horner (born October 19, 1936) is a retired USAF Four-Star General. He was born in Davenport, Iowa and attended the University of Iowa, as part of the Air Force ROTC program. On June 13, 1958, Horner was commissioned into the Air Force Reserve. During the Vietnam War, he flew in combat as a Wild Weasel pilot and received the Silver Star. During Operation Desert Shield and Operation Desert Storm, he commanded the American aerial forces, as well as those of the American allies. During the Desert Shield phase of the conflict, Horner briefly served as Commander-in-Chief — Forward of U.S. Central Command; while General Schwarzkopf was still in the United States. He currently serves on the board of directors for the US Institute of Peace. 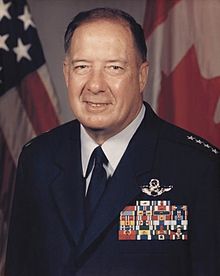 “The title came from the guys who flew in World War II and Korea who risked their lives and suffered so much to teach us young guys that were going to replace them how to become good in combat. We had a training program called 'Every Man a Tiger' where they trained you to feel that you could dominate air battle. Anybody who went up against you, you were going to kick their ass. That's what it's all about.”

“I wanted to tell the story about air power, but I didn't want to lecture people. Let the story come out of the anecdotes. ... The other thing I wanted to do was create some romance, some passion about things that go on in the military. So it goes well beyond airplanes and bombs and strategy and national policy. It goes into things like families, into how wives kiss their husbands good-bye when they go off to war.”