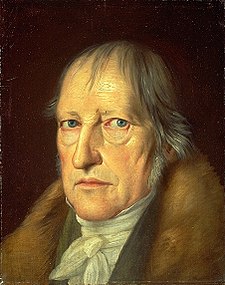 Georg Wilhelm Friedrich Hegel (/?he???l/; German: [??e???k ?v?lh?lm ?f?i?d??ç ?he???l]; August 27, 1770 – November 14, 1831) was a German philosopher of the late Enlightenment. He achieved wide renown in his day and, while primarily influential within the continental tradition of philosophy, has become increasingly influential in the analytic tradition as well. Although he remains a divisive figure, his canonical stature within Western philosophy is universally recognized.

The learner always begins by finding fault, but the scholar sees the positive merit in everything.

Truth is found neither in the thesis nor the antithesis, but in an emergent synthesis which reconcil ...

It is easier to discover a deficiency in individuals, in states, and in Providence, than to see thei ...

The only Thought which Philosophy brings with it to the contemplation of History, is the simple conc ...

Freedom is the fundamental character of the will, as weight is of matter... That which is free is th ...

The Few assume to be the deputies, but they are often only the despoilers of the Many.

The owl of Minerva spreads its wings only with the falling of the dusk.

It is solely by risking life that freedom is obtained; . . . the individual who has not staked his o ...

World history is a court of judgment.

Philosophy is the history of philosophy.

Regarding History as the slaughter-bench at which the happiness of peoples, the wisdom of States, an ...

What history teaches us is that neither nations nor governments ever learn anything from it.

The State is the Divine idea as it exists on Earth.