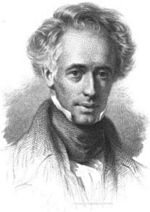 George Combe (21 October 1788 – 14 August 1858) was a Scottish lawyer and the leader of – and the spokesman for – the phrenological movement for more than twenty years. He founded the Edinburgh Phrenological Society in 1820 and was the author of the highly influential The Constitution of Man (1828). Combe trained in Scots law and had an Edinburgh solicitor's practice. In his later years, after a successful marriage in 1833, Combe devoted himself to international travel in the promotion of phrenology.

While some of them acknowledge the obligation of natural morality in their mode of conducting their ...

They are few in the midst of an overwhelming mass of brute force, and their submission is wisdom; bu ...

Phrenology taught us that the mind thinks by means of the brain, is liable to become fatigued by too ...

The same practice was continued every evening through the whole course, and with the same success. M ...

The interval allowed was only five minutes, at the end of which I resumed the lecture; but so refres ...

I called their attention also to the absence of all means of ventilating the hall, remarking that, a ...

Fashion is not a real element of beauty in external objects; and to persons who possess a good endow ...

And if these be unprincipled agents who scruple at nothing, he will be a bold man who will deny that ...

He has a number of curious facts in illustration of the power of mere goodness to protect against ou ...

The friends whom I have are invaluable, and although not numerous they are sufficient for my enjoyme ...

I requested the gentlemen to put on their hats, and the ladies their shawls, to avoid catching cold, ...

A tendency to resume the same mode of action at stated times is peculiarly the characteristic of the ...

While some animals exhibit individual powers in higher perfection, man stands for their superior, no ...