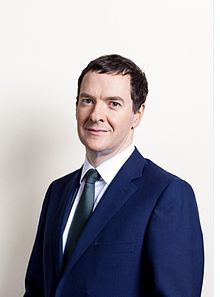 George Gideon Oliver Osborne, CH, PC (born Gideon Oliver Osborne; 23 May 1971) is a British Conservative Party politician, who was Member of Parliament (MP) for Tatton from June 2001 until he stood down on 3 May 2017. He served as Chancellor of the Exchequer under Prime Minister David Cameron from 2010 to 2016. In March 2017, he was appointed editor of the London Evening Standard, and started the role in May. He has announced that he will not stand at the 2017 general election.

I understand the damage the expenses crisis has done to Parliament, and the paramount importance of ...

Of all the public services, education is the one I'm most interested in. You get a more dynamic econ ...

There was a real fear that a euro-zone bank might fail, that we'd have a sovereign debt problem in o ...

Britain has no divine right to be one of the richest countries in the world.

Everyone in our society has had to make a contribution towards dealing with the debts.

A generous basic state pension is the least a civilized society should offer those who have worked h ...

Just as we should never balance the budget on the backs of the poor, so it is an economic delusion t ...

It is not fair that people who are born in the UK to parents who are domiciled here, can later in li ...

The positive news is that the British economy is continuing to grow and is creating jobs. And it is ...

Tax cuts should be for life, not just for Christmas.

I'm not going out to parties every night.

The British people think that if someone is disabled, then they should get all the care and support ...

I had the closest thing I have ever had to an out-of-body experience lying in bed one morning. I tur ...