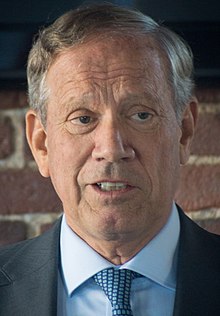 George Elmer Pataki (/p??t??ki/; born June 24, 1945) is an American lawyer and politician who served as the 53rd Governor of New York (1995–2006). A member of the Republican Party, Pataki was a lawyer who was elected mayor of his home town of Peekskill, later going on to be elected to State Assembly, then State Senate. In 1994, Pataki ran for governor against three-term incumbent Mario Cuomo, defeating him by over a three-point margin as part of the Republican Revolution of 1994. Pataki, succeeding a three-term governor, would himself be elected to three consecutive terms, and was the third Republican Governor of New York elected since 1923, the other two being Thomas Dewey and Nelson Rockefeller. Pataki, as of January 2017 is the last Republican to serve as Governor of New York.

The expansion of tobacco cessation centers is an important part of our historic and continuing effor ...

We are going through tough economic times but things are looking up, and the indicators are improvin ...

Let's make New York the safest state in America - that must be our goal. Let's achieve it together.

It is a very real concern and my view is that everything changed on September 11th and the procedure ...

If someone lives in New York, he's a New Yorker - they are entitled to the best medical system in th ...

For the first time federal, state and local bureaus of investigation are coordinating their effort, ...

This Budget reflects a choice - not an easy choice, but the right choice. And when you think about i ...

We know that when people are safe in their homes, they are free to pursue their dream for a brighter ...

I'm thinking about governing as the governor of this state, and that's what I'm going to do.

After September 11th, nations from across the globe offered their generous assistance to the people ...

I have two sons. Both served. One as a marine officer in Iraq, one as an army officer in Afghanistan ...

Our decade of change has unleashed the ingenuity, creativity, and character of the most extraordinar ...

I knew that good people who wanted to be a part of the American dream have become trapped in depende ...