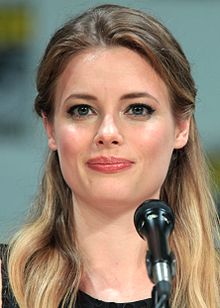 Gillian MacLaren Jacobs (/???li?n/; born October 19, 1982) is an American actress. She is known for portraying Britta Perry on the NBC/Yahoo! Screen comedy series Community and stars as Mickey Dobbs on the Netflix series Love. Jacobs has also had a recurring role as Mimi-Rose Howard on the HBO series Girls and has appeared in films such as Gardens of the Night (2008), The Lookalike (2014), Life Partners (2014), Hot Tub Time Machine 2 (2015), Don't Think Twice (2016) and Brother Nature (2016).

As you become an adult and start to make your way in life, you realize how much your friends are you ...

I've had a very positive experience in L.A. in the comedy world and found everyone to be very nice a ...

Dan Harmon has this idea that characters on TV are allowed to talk about their favorite movies and T ...

What I think is a really special movie is 'Black and White' with Kevin Costner and Octavia Spencer, ...

I've gotten super into restaurants in L.A., so I try to go to different restaurants all the time... ...

When you can impress your mom by saying you've been to someone's concert, you know you're pretty lam ...

I'm really excited that 'The Other Woman' did so well at the box office, and I hope that will keep e ...

I think when you have some success as a kid, your notion of being a good actor is pleasing the direc ...

NBC gives comedies a chance to find their legs.

I went to college and got my degree in acting, but because it was all theater, I really consider my ...

I've been getting into drinking smoothies in the morning - I like those a lot.

There are these important things in some people's lives that can make you laugh even when you're goi ...

The Comeback' is my favorite TV show of all-time because it's just brill. It's Lisa Kudrow's show ab ...