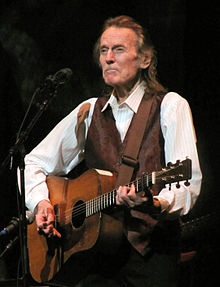 Gordon Meredith Lightfoot Jr. CC OOnt (born November 17, 1938) is a Canadian singer-songwriter who achieved international success in folk, folk-rock, and country music, and has been credited for helping define the folk-pop sound of the 1960s and 1970s. He has been referred to as Canada's greatest songwriter and internationally as a folk-rock legend.

You just get the vibes of your surroundings and it rubs off on you.

Let our hearts touch far horizons. Let our love know no borders, Draw the Circles wide until, No one ...

A lot of people influenced me as I was learning but probably Bing Crosby was the most influential, b ...

I once performed The Wreck of the Edmund Fitzgerald to about 15 sea captains. The song was about a s ...

All that remains is the faces and the names of the wives and the sons and the daughters.

Silent waters rocking on the morning of our birth, like an empty cradle waiting to be filled. And fr ...

You will go with me everywhere. When I'm dreaming, you still share my lonely nights.

Does anyone know where the love of God goes when the waves turn the minutes to hours?

The road to love is littered by the bones of other ones, who by the magic of the moment were mysteri ...

The giant neon spinning discs are a reminder of the huge role that Sam Sniderman and his store playe ...

I liked the American folk style of Woody Guthrie.

There is always something wrong with a song, you can't be perfect.

Both the Beatles and The Rolling Stones broke on the music scene the summer I was in England. I can ...

Sometimes a broken dream will make you sad or make you mean. Sometimes things ain't bad as they seem ...

I can remember sitting in a cabin outside of Denver writing that with a can of soup on the stove.