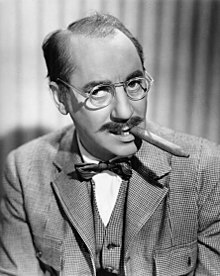 Julius Henry "Groucho" Marx (October 2, 1890 – August 19, 1977) was an American comedian and film and television star. He was known as a master of quick wit and is widely considered one of the best comedians of the modern era. His rapid-fire, often impromptu delivery of innuendo-laden patter earned him many admirers and imitators.

I, not events, have the power to make me happy or unhappy today. I can choose which it shall be. Yes ...

I refuse to join any club that would have me as a member.

The secret of life is honesty and fair dealing. If you can fake that, you've got it made.

Man does not control his own fate. The women in his life do that for him.

Marriage is a wonderful institution, but who wants to live in an institution?

Anyone who says he can see through women is missing a lot.

I intend to live forever, or die trying.

A hospital bed is a parked taxi with the meter running.

I have had a perfectly wonderful evening, but this wasn't it.

The Alps are a simple folk, living on a diet of old shoes. And the Lord Alps those who alp themselve ...

I must say I find television very educational. The minute somebody turns it on, I go to the library ...

Marriage is the chief cause of divorce.

“Both teams got away with a lot. But their up-in-your-face intensity is different from what we see with lots of teams.”