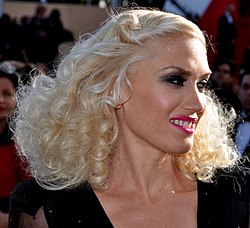 Gwen Renée Stefani (/st??f??ni/; born October 3, 1969) is an American singer, songwriter, fashion designer, and actress. She is the co-founder and lead vocalist of the ska band No Doubt. During the band's hiatus, Stefani embarked on a solo career in 2004 by releasing her debut studio album Love. Angel. Music. Baby. Inspired by pop music of the 1980s, the album was met with both critical and commercial success. It spawned three major worldwide hit singles: "What You Waiting For?," "Rich Girl," and "Hollaback Girl," the latter becoming the first US digital download to sell one million copies. In 2006 Stefani released her second studio album The Sweet Escape. The album produced two successful singles: "Wind It Up" and the album's title track "The Sweet Escape." Including her work with No Doubt, Stefani has sold more than 30 million albums worldwide. Her third solo album, This Is What the Truth Feels Like, was released on March 18, 2016.

I was thinking that when I have children, that I should always dress as a character for them, so the ...

Before, I was really passive, all I cared about was being in love with my boyfriend. I didn't have a ...

You know, I was chubby when I was a little girl. And I have all those issues everyone else has. But ...

Now I'm a wife and a mother of two. It's a really different role. I always referred to No Doubt as a ...

The one thing that makes me feel super lucky about my financial success is that I have a housekeeper ...

It feels like the more I'm out there in the public eye, the more criticism I get. You need to have c ...

As a famous person you think how you're gonna end it, get away and have a normal life.

Music has this emotional thing to it, and it touches people in crazy ways. The power of having that ...

This last year I kind of stopped working out. I think my body just needed a break. And so I did that ...

My priorities are always going to be my husband and my family now. That's a huge, huge thing.

I got married and decided I wanted to do a dance record, and I didn't ever expect for it to be what ...

Being a mom is hard, I think a lot of working moms feel that way.

I'm like every other girl. I have to try really hard my whole life to try to be fit. And I'm super-v ...