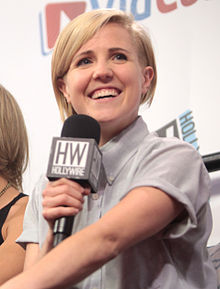 Hannah Maud Hart (born November 2, 1986), is an American internet personality, comedian, author and actress. She is best known for starring in My Drunk Kitchen, a weekly series on YouTube in which she cooks something while intoxicated. Apart from her main channel, she also runs a second channel where she talks about life in general and gives her opinions on various topics. She co-produced and starred in the independent comedy film Camp Takota, released in 2014. She wrote a parody cookbook which was a New York Times bestseller for five weeks in August–September 2014.

As it turns out, that feeling of being lost or listless or never achieving your potential doesn't co ...

Don't force yourself to go party if you're not in the mood.

I'm simultaneously terrified of the thoughtï»¿ of existing forever and not existing at all. Where ...

Nobody is wired wrong, because there's no wrong and right in the way we are.

Surround yourself with people that you know will take care of you. It's not so much a mistake advice ...

Dance with the one that brought you

There are certain people who will always seek to criticize. This has nothing to do with you. It must ...

I think all women in all industries have more obstacles than men.

A pitcher is worth a thousand worts.

I think the best way to crash a stranger's party would be to arrive as the pizza person, buy pizza, ...

I'm excited about Thanksgiving. It's my favorite holiday. It's the feast of a thousand senses, so ju ...

I hope that as my career continues I get to create and work on more LGBT projects and bring LGBT sto ...

I think that you should just create if you have the urge to create. There's a lot of other careers y ...

If you just want to make stuff and put it out there so people can see that, great. Do that. Nothing ...