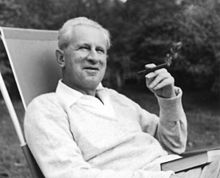 Herbert Marcuse (German: [ma??ku?z?]; July 19, 1898 – July 29, 1979) was a German-American philosopher, sociologist, and political theorist, associated with the Frankfurt School of Critical Theory. Born in Berlin, Marcuse studied at the universities of Berlin and then at Freiburg, where he received his Ph.D. He was a prominent figure in the Frankfurt-based Institute for Social Research – what later became known as the Frankfurt School. He was married to Sophie Wertheim (1924–1951), Inge Neumann (1955–1972), and Erica Sherover (1976–1979). In his written works, he criticized capitalism, modern technology, historical materialism and entertainment culture, arguing that they represent new forms of social control.

The people recognize themselves in their commodities; they find their soul in their automobile, hi-f ...

To live one's love and hatred, to live that which one is means defeat, resignation, and death. The c ...

This mutual dependencies no longer the dialectical relationship between master and servant, which ha ...

The criterion for free choice can never be an absolute one, but neither is it entirely relative.

The abbreviations (e.g. NATO, UN, USSR - E.W.) denote that and only that which is institutionalized ...

The avant-garde and the beatniks share in the function of entertaining without endangering the good ...

This organization of functional discourse is of vital importance; it serves as a vehicle of coordina ...

The range of choice open to the individual is not the decisive factor in determining the degree of h ...

The capabilities (intellectual and material) of contemporary society are immeasurably greater than e ...

[Art] can speak its own language only as long as the images are alive which refuse and refute the es ...

A work of art can be called revolutionary if, by virtue of the aesthetic transformation, it represen ...

Free election of masters does not abolish the masters or the slaves.

The spontaneous reproduction of superimposed needs by the individual does not establish autonomy; it ...

Coming to life as classics, they come to life as other than themselves; they are deprived of their a ...

One-dimensional thought is systematically promoted by the makers of politics and their purveyors of ...