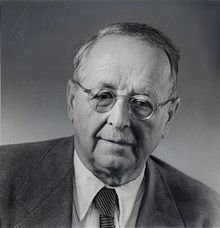 Hermann Klaus Hugo Weyl, ForMemRS (German: [va?l]; 9 November 1885 – 8 December 1955) was a German mathematician, theoretical physicist and philosopher. Although much of his working life was spent in Zürich, Switzerland and then Princeton, he is associated with the University of Göttingen tradition of mathematics, represented by David Hilbert and Hermann Minkowski. His research has had major significance for theoretical physics as well as purely mathematical disciplines including number theory. He was one of the most influential mathematicians of the twentieth century, and an important member of the Institute for Advanced Study during its early years.

Symmetry, as wide or as narrow as you may define its meaning, is one idea by which man through the a ...

Mathematics is not the rigid and rigidity-producing schema that the layman thinks it is; rather, in ...

Without the concepts, methods and results found and developed by previous generations right down to ...

Besides language and music, it [mathematics] is one of the primary manifestations of the free creati ...

No mathematician of equal stature has risen from our generation... Hilbert was singularly free from ...

You can not apply mathematics as long as words still becloud reality.

In geometric and physical applications, it always turns out that a quantity is characterized not onl ...

... numbers have neither substance, nor meaning, nor qualities. They are nothing but marks, and all ...

For mathematics, even to the logical forms in which it moves, is entirely dependent on the concept o ...

Logic is the hygiene the mathematician practices to keep his ideas healthy and strong.

A modern mathematical proof is not very different from a modern machine, or a modern test setup: the ...

The introduction of numbers as coordinates is an act of violence.

Besides language and music, mathematics is one of the primary manifestations of the free creative po ...

Mathematics has the inhuman quality of starlight, brilliant and sharp, but cold.