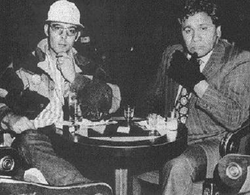 Hunter Stockton Thompson (July 18, 1937 – February 20, 2005) was an American journalist and author, and the founder of the gonzo journalism movement. Born in Louisville, Kentucky, to a middle-class family, Thompson had a turbulent youth after the death of his father left the family in poverty. He was unable to formally finish high school as he was incarcerated for 60 days after abetting a robbery. He subsequently joined the United States Air Force before moving into journalism. He traveled frequently, including stints in California, Puerto Rico, and Brazil, before settling in Aspen, Colorado, in the early 1960s.

In a closed society where everybody's guilty, the only crime is getting caught. In a world of thieve ...

Buy the ticket, take the ride.

There is no such thing as paranoia. Your worst fears can come true at any moment.

Politics is the art of controlling your environment.

A word to the wise is infuriating.

The person who doesn't scatter the morning dew will not comb gray hairs.

Freedom is something that dies unless it's used.

The TV business is uglier than most things. It is normally perceived as some kind of cruel and shall ...

I am more than just a serious basketball fan. I am a life-long addict. I was addicted from birth, in ...

March is a month without mercy for rabid basketball fans. There is no such thing as a 'gentleman gam ...

I am not a yachting person, by nature, but I have just enough experience on the sea under sail to fe ...

If Sunday is the Lord's day, then Saturday belongs to the Devil. It is the only night of the week wh ...

I can't think in terms of journalism without thinking in terms of political ends. Unless there's bee ...

Gambling can turn into a dangerous two-way street when you least expect it. Weird things happen sudd ...