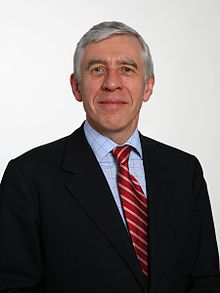 John Whitaker "Jack" Straw (born 3 August 1946) is an English politician who served as the Member of Parliament (MP) for Blackburn from 1979 to 2015. Straw served in the Cabinet from 1997 to 2010 under the governments of Tony Blair and Gordon Brown. He held two of the traditional Great Offices of State, as Home Secretary from 1997 to 2001 and Foreign Secretary from 2001 to 2006 under Blair. From 2007 to 2010 he served as Lord Chancellor and the Secretary of State for Justice throughout Brown's Premiership. Straw is one of only three individuals to have served in Cabinet continuously under the Labour government from 1997 to 2010, the others being Gordon Brown and Alistair Darling.

Holocaust Memorial Day is intended as an inclusive commemoration of all the individuals and communit ...

If the situation in Zimbabwe continues to deteriorate, Britain will argue for Zimbabwe's suspension ...

It's extraordinary what children put up with. I happened to see two of my uncles put my father up ag ...

There has to be some certainty about who the leader is before the summer break.

There were five children in my family, and arguing was how we used to entertain ourselves.

“So far as travel advice to Kenya is concerned, it already warns of possible dangers and we will b ...

“Yes, things have been difficult -- but don't let anybody tell you it's been all bad.”

“Frankly I'm not holding my breath for any confessional statement from Saddam Hussein,”

“There is a general sense of guarded optimism. There have been too many false dawns over the last ...

“In the event of failure to uphold international standards, the draft conclusions make it clear th ...

“The consequences of a failure of nerve to deal with the threat posed by Iraq's weapons of mass de ...

“Let there be no doubt that any failure by Iraq to comply with its obligations will lead to seriou ...

“Every country is under an imperative to deal with terrorism, including terrorism masquerading as ...

“I really don't think it would be wise to speculate in an abstract way about the circumstances in ...