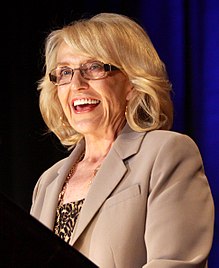 Janice Kay Brewer (born September 26, 1944) is an American politician and author who served as the 22nd Governor of the U.S. state of Arizona, from 2009 to 2015. A member of the Republican Party, Brewer is the fourth woman, and third consecutive woman, to serve as Governor of Arizona. Brewer previously served as Secretary of State of Arizona from January 2003 to January 2009, when Governor Janet Napolitano resigned after being selected as Secretary of Homeland Security. Brewer became Governor of Arizona as part of the line of succession, as determined by the Arizona Constitution.

Fifty thousand people in Mexico have been murdered. Puerto Penasco, 60 miles south of our border, ju ...

Arizona, our beautiful state, was built on mining. Copper is huge here, and now uranium. And then we ...

We have over 500,000 illegal immigrants living in Arizona. And we simply cannot sustain it. It costs ...

My mother always told me that as you go through life, no matter what you do, or how you do it, you l ...

It wouldn't matter whether you were Latino or Hispanic or Norwegian. If you didn't have proof of cit ...

I am encouraged that there's going to be much better dialogue between the federal government and the ...

Texas has done a very good job of securing their borders with the help of the federal government. Ca ...

And now, since I've been governor since last January, I have written numerous letters to the adminis ...

I don't believe any person looking for work is fearful of political judgment. Government is a large ...

And under the existing circumstances, I understand there are situations where people indeed need car ...

Arizona is a red state, and we're going to keep it red.

Government just simply can't do everything for everyone.

You know, I think there was a point in time when people didn't really understand how birth certifica ...