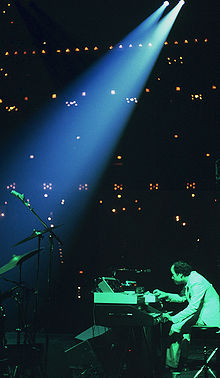 Jan Hammer (Czech pronunciation: [?jan ??am?r]) (born 17 April 1948) is a Czech-born American musician, composer and record producer. He first gained his most visible audience while playing keyboards with the Mahavishnu Orchestra in the early 1970s, as well as his film scores for television and film including "Miami Vice Theme" and "Crockett's Theme", from the popular 1980s program, Miami Vice. He has continued to work as both a musical performer and producer, expanding to producing film later in his career.

It was very hard to get any records, so the only source for us to really hear what was happening was ...

The problem that I have is with the music business. For some reason it seems almost impossible to ge ...

Emotions are the fuel to really move you along - that's the only way you can create music. If you do ...

You never know what you find once you really get going.

Growing up, I was very much interested in jazz music.

My mother is a singer, still performs today; she's a jazz singer.

The passion and spontaneity in music is all gone.

I spent well over a year on the road with Sarah Vaughn. That was amazing.

I've been doing a lot of music for films and television for quite a few years.

Everything from now on will be done online - physical music media like the CD are dead in the water.

Still for fun, I play the drums, but I don't do much recording with them.