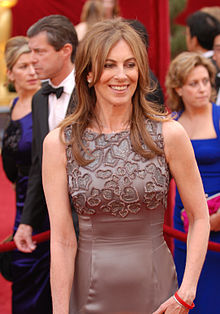 Kathryn Ann Bigelow (/?b????lo?/; born November 27, 1951) is an American film director, producer, and writer. Her films include the vampire Western horror film Near Dark (1987), the action crime film Point Break (1991), the science fiction action thriller Strange Days (1995), the mystery thriller The Weight of Water (2000), the submarine thriller K-19: The Widowmaker (2002), the war film The Hurt Locker (2009), the action thriller war film Zero Dark Thirty (2012), and the short film Last Days of Ivory (2014). The Hurt Locker won the 2009 Academy Award for Best Picture and the BAFTA Award for Best Film, and was nominated for the 2009 Golden Globe Award for Best Drama.

When James Cameron brought me the script, which I developed with both Cameron and Jay Cocks, I wante ...

Our film examines the heroism, courage and prowess of the Soviet submarine force in ways never seen ...

There's really no difference between what I do and what a male filmmaker might do. I mean we all try ...

One of the elements in the film that really fascinated me was not to look at the world in bi-polar t ...

I'm drawn to filmmaking that can transport me. Film can immerse you, put you there.

On the other hand, I believe there's hope, because the breakdown and the repair are happening simult ...

I don't do what I do to try and break a glass ceiling.

When he brought it to me four years ago, Rodney King had just arrived, I was involved in the clean-u ...

My dad used to draw these great cartoon figures. His dream was being a cartoonist, but he never achi ...

I suppose I like to think of myself as a film-maker.

I don't want to be made pacified or made comfortable. I like stuff that gets your adrenaline going.

Those of us who work in the arts know that depiction is not endorsement. If it was, no artist would ...

The Communist regime didn't consider this to be a shining moment in history and assigned no heroism ...

Right now, there's the illusion of order and civilization, but there's a tremendous amount of econom ...