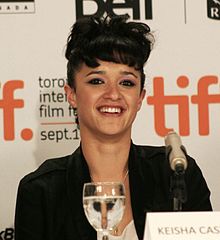 Keisha Castle-Hughes (born 24 March 1990) is a New Zealand actress who rose to prominence for playing Paikea "Pai" Apirana in the film Whale Rider. The film was nominated for many awards, including an Academy Award for Best Actress for which she was at the time the youngest person nominated in the Best Actress category and an award at the Broadcast Film Critics Association Awards for Best Young Actor/Actress, which she won in 2004.

I've lived a fast-paced life, but I had the best childhood. I didn't miss out on anything by having ...

I was able to grow up and do silly things and have a life with only a small amount of public scrutin ...

Your private life should be private. I reckon that's a good thing that you talk about your work and ...

I absolutely love being a mother. It's been a blessing. It's fun and it's hard, but it's absolutely ...

I thought 'I can't be an actor, I can't'. Then this film came up and it was like someone saying to m ...

Thanks to a lot of people, not just myself, Whale Rider had an amazing impact emotionally, and peopl ...

I want to be a science teacher. My friends asked me why, but I'm intrigued by it and I'm quite good ...

It feels kind of strange knowing that I rule the whole planet of Naboo and I'm only thirteen. At fir ...