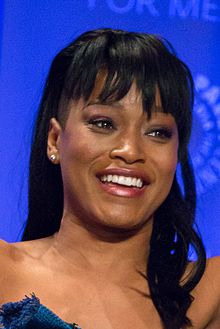 Lauren Keyana "Keke" Palmer (born August 26, 1993) is an American actress, singer, songwriter, presenter and television personality. Palmer was born in Harvey, Illinois and raised in Robbins, Illinois. After Palmer's film debut, Palmer and her family moved to California to help her pursue a career in acting. Palmer released her debut album, So Uncool, on September 18, 2007 through Atlantic Records. The album failed to chart on the US Billboard 200 but did chart at number 85 on the R&B chart. The album was preceded by the second single "Keep It Movin'".

Anything that controls my state of mind I never really want to do because I always want to be under ...

When I was, like, 5 years old, I used to pray to have light skin because I would always hear how pre ...

I really look up to Will Smith. He's internationally known, and people know him from everything. I d ...

Comedians like to see people smile. With acting, I love giving people a feeling, an emotion. I like ...

My father's a deacon, my mother's a choir director, so I grew up in the church and singing in the ch ...

People that want to be in the tabloids will get into the tabloids. I just stay home and don't go out ...

I've never really had a first date! Well, I had kind of a first date. I went out with this kid. We w ...

I love competing. I love a challenge. I love going in and showing people what I can do, proving to t ...

Giving back, doing motivational speeches and stuff like that, that's always made me feel good. If yo ...

I can't work all day and then go home and hang out with the same people. I don't want everything to ...

Working with Ice Cube was so tight. He's cool, and I really like how he does family stuff. My guy fr ...

God is so good. Always follow your dreams, own your Purpose! Embrace God's Anointing

I dont wish for anything. Wishing for a million dollars feels greedy. I just wish for the best for m ...

I love being in the studio. Expressing myself that way is really cool.