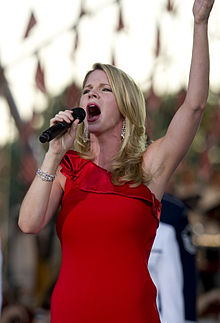 Kelli Christine O'Hara (born April 16, 1976) is an American actress and singer. She has appeared on Broadway and Off-Broadway in many musicals since making her Broadway debut as a replacement in Jekyll & Hyde in 2000. A six-time Tony Award nominee, her first nomination was for Best Featured Actress in a Musical for the 2005 production of The Light in the Piazza. Her subsequent nominations were for The Pajama Game (2006), South Pacific (2008), Nice Work If You Can Get It (2012) and The Bridges of Madison County (2014), before winning the Tony Award for Best Lead Actress in a Musical for the 2015 revival of The King and I.

I was raised in Oklahoma. I was actually born in Tulsa, but I grew up in a small town on the west si ...

My great-grandfather, Peter O'Hara, was born in Ireland, I believe, in County Clare. His father, my ...

I think it can be a good idea to know what you do well and use that to open the door for yourself. O ...

I don't mind talking about my family and how to balance it all. But, in today's world, we should pro ...

We didn't have a lot of live theater in Oklahoma. I didn't visit New York when I was growing up. I w ...

I've had great opportunities to show different sides of myself, but the challenge will always be get ...

The 'Carousel' overture has always been one of my all-time favorite pieces of music.

When I was a kid, I would sing in people's living rooms and for different little family things.

If I get tickled in a certain way, I actually lose the ability to stand. I don't mean to, but someth ...

I don't want to be famous for being famous.

The hardest role that I've ever tried to play was Clara Johnson in 'Light in the Piazza' at Lincoln ...

I love to play things that are out-of-the-box. It's just that I don't always get the chance to do it ...

Everyone's story is different, and we can't really be inside them.

I don't ever sing classically when I am singing a contemporary score - I kind of try to fit in whate ...

To play a character is to inhabit the world and the life of that character.