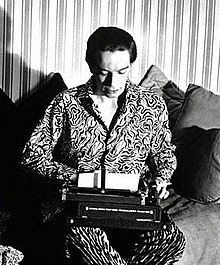 Kenneth Peacock Tynan (2 April 1927 – 26 July 1980) was an English theatre critic and writer. Making his initial impact as a critic at The Observer (1954–58, 1960–63), he praised Osborne's Look Back in Anger (1956), and encouraged the emerging wave of British theatrical talent. In 1963, Tynan was appointed as the new National Theatre Company's literary manager.

The buttocks are the most aesthetically pleasing part of the body because they are non-functional. A ...

It is Ireland's sacred duty to send over, every few years, a playwright to save the English theater ...

Art and ideology often interact on each other; but the plain fact is that both spring from a common ...

“The sheer complexity of writing a play always had dazzled me. In an effort to understand it, I be ...

“Art is a private thing, the artist makes it for himself; a comprehensible work is the product of ...

“A good drama critic is one who perceives what is happening in the theatre of his time. A great dr ...

“A good many inconveniences attend playgoing in any large city, but the greatest of them is usuall ...

“The vengeful hag is played by Ingrid Bergman, which is like casting Eleanor Roosevelt as Lizzie B ...

“A dramatist is a congenital eavesdropper with the instincts of a Peeping Tom.”

“No theater could sanely flourish until there was an umbilical connection between what was happeni ...

“Not content to have the audience in the palm of his hand, he goes one further and clinches his fi ...

“An office block made of prestressed celery.”