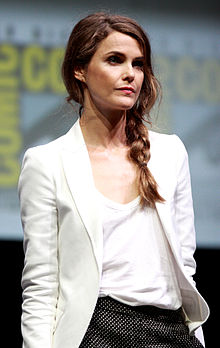 Keri Lynn Russell (born March 23, 1976) is an American actress. She came to fame for portraying the title role of Felicity Porter on the series Felicity, which ran from 1998 to 2002, and for which she won a Golden Globe Award. Russell has since appeared in several films including Mission: Impossible III (2006), Waitress (2007), August Rush (2007), Extraordinary Measures (2010), Dawn of the Planet of the Apes (2014), and currently stars as KGB agent Elizabeth Jennings in the FX television series The Americans.

Sometimes it's the smallest decisions that can change your life forever.

When I was on the 'Mickey Mouse Club,' there was Britney Spears, Justin Timberlake and Ryan Gosling ...

People expect all women to react the same to pregnancy. But anyone who's been around pregnant women ...

Who knows? Maybe years from now I'll be on a ranch in Colorado with 10 kids. The whole point of life ...

I want to be able to raise my kid. I was totally being a martyr about it at first, thinking I could ...

I know not every mom is a secret KGB spy, but every mom has this whole other life. Every dad and eve ...

I am literally the worst person at keeping secrets. I'd be the worst spy of all time.

The kind of hero worship you have, when a parent is lost early and you don't know all their faults a ...

Dance has helped me with everything. It was a great foundation for discipline, hard work and, unfort ...

I would splurge on a great pair of high heels, because you can wear them to something fancy, but reg ...

Eating a cookie never feels strange. I am a big believer in food in general.

Growing up, I would say Wonder Woman and Nancy Drew were definite role models for me. Historically, ...

Growing up, I would say Wonder Woman and Nancy Drew were definite role models for me. Historically, ...

I am crazy for dessert. I eat everything. No one should be denied anything... just don't eat the who ...