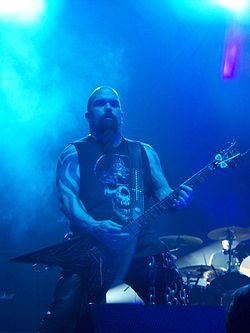 Kerry Ray King (born June 3, 1964) is an American musician, best known as a guitarist for the American thrash metal band Slayer. He co-founded the band with Jeff Hanneman in 1981 and has been a member ever since. He became lead songwriter for the band after Hanneman's death. King also played as lead guitarist with Dave Mustaine in 1984 with his band Megadeth.

If I'm ever feeling uninspired, all I have to do is go see Exodus or Arch Enemy, and think 'Oh yeah, ...

It's fun when you are on tour to go a place you are familiar with in any given city. It's like being ...

I have tons of friends in the heavy-metal music world, and just going to see them inspires me.

My first figure was a SLAYER eagle. And the dragons and the tribals are all I have got.

I think the church and the religion right now have a lot more to be worried about than SLAYER.

Well, to be honest with you, yes there is and there is not. But as I am a fan of this kind of music ...

In the crazy world of touring, if something gets stuck at customs, I can do a show with just my amp!

It's hard 'coz you have got different time zones; you can't sleep and y'know, it's boring way for th ...

You kind of have to become a song so to speak and we wanted to make sure that Tom did them with the ...

When we play 'Angel of Death', it's actually a 2 and half minutes sing 'til our party starts. That s ...

We haven't played that many of them because all our gear was over here waiting for us when we could ...

Traditionally the show must go on which is a stupid thing to say, but that in a nutshell is what's g ...

Hate heals, you should try it sometime.

This new one was held for a couple months, so I guess it was better, but when we go into thinking ou ...

When something irritates me, I don't go home and write; I just don't do that.