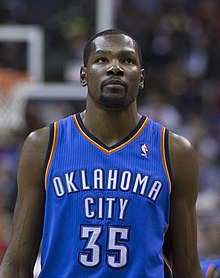 Kevin Wayne Durant (born September 29, 1988) is an American professional basketball player for the Golden State Warriors of the National Basketball Association (NBA). Durant has won an NBA Most Valuable Player Award, four NBA scoring titles, the NBA Rookie of the Year Award, and two Olympic gold medals. He has also been selected to seven All-NBA teams and eight All-Star teams.

Scott Brooks you mean the world to me. I love you. You as a man, I never met anybody like you. So se ...

I'm a basketball player. That's what I do and what I love but that's just not all who I am. I'm tale ...

And I didn't fall in love with the game of basketball just because it was me playing. I fell in love ...

I wanted to the best player in the state - [the best] the area has ever seen. That's always been my ...

My dream was to become a rec league coach. I love basketball so much, I love playing it, I just neve ...

It feels good to be a part of history.

Work harder than your opponent.

I want to go down as a winner.

I like something simple and traditional, like dinner and a movie. The best way to get to know someon ...

Mr. Bennett, for just giving me this opportunity. I thank you for always being there for me when I n ...

I'm busy working on every aspect of my game - defense, shooting, rebounding - but I really want to b ...

The clothes are not making me... If I like it, that's all that matters...It's not about the clothes. ...

When people are used to you doing something, they want you to stay in that lane.