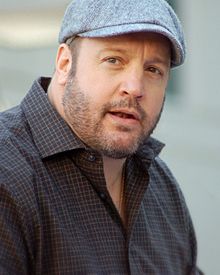 Thanksgiving, man. Not a good day to be my pants.

There's no better feeling in the world than a warm pizza box on your lap.

I had many teachers that were great, positive role models and taught me to be a good person and stan ...

I could never be James Bond.

I don't want to be known as this goody-two-shoes who can only do comedies where puppies are licking ...

I've always been the guy who doesn't necessarily get it with women. A woman would have to say, 'I li ...

I think I invented the phrase 'Don't overdo it.'

Teachers have a chance to mold someone, inspire them. I hope all teachers realize that.

A song can take you to a special time in your life.

I'm not a Hollywood guy.

From there, I tried out for a community theatre play, joined an improv group... it all started openi ...

If I do a movie where I have to have a son and it's a chubby kid, my mother is always like, 'You wer ...

For some reason and I don't know why, but I don't think that I'm funny in California. So I always wa ...

I never played a musical instrument growing up but I knew kids who did and took it very seriously.