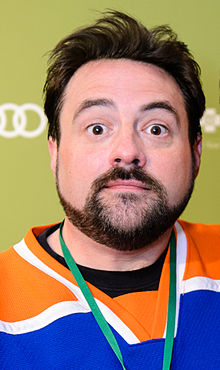 Kevin Patrick Smith (born August 2, 1970) is an American filmmaker, actor, comedian, public speaker, comic book writer, author, and podcaster. He came to prominence with the low-budget comedy Clerks (1994), which he wrote, directed, co-produced, and acted in as the character Silent Bob of stoner duo "Jay & Silent Bob". Jay and Silent Bob have appeared in Smith's follow-up films Mallrats, Chasing Amy, Dogma, and Jay and Silent Bob Strike Back which were mostly all set in his home state of New Jersey. While not strictly sequential, the films frequently featured crossover plot elements, character references, and a shared canon described by fans as the "View Askewniverse", named after his production company View Askew Productions, which he co-founded with Scott Mosier.

I'd see movies, comedies, and I loved 'Animal House', I loved all the John Hughes stuff, but I never ...

It's like a dream come true. When somebody is paying you to talk about yourself, you've won.

You can have 10 bucks to 10 million bucks and if you got a crew, imagination and a lot of people wil ...

Whenever I'm not shooting, I'm in the editing room with my footage. While the crew is taking 15 minu ...

You know, comics and movies, even if you take a comic and turn it into a movie, we can't all be Joss ...

You know, there's a million fine looking women in the world, dude. But they don't all bring you lasa ...

I know what it feels like to carry a lot of weight in a society that's very image-conscious. It's a ...

In Hollywood you just fail upwards.

In Hollywood you kind of fail upwards

Why do my movies make people feel so dead inside?

If there was no Internet, my career would have ended in 1995.

And George Carlin was a guy that the more he aged the younger he seemed.

I didn't get into film to win Academy Awards. I wanted to have a conversation with the audience.