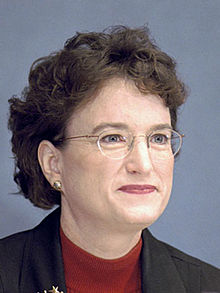 Kim Gandy (born January 25, 1954) is an American feminist who from 2001 to 2009 was the president of the National Organization for Women. She has been president and CEO of the National Network to End Domestic Violence since 2012. In 2009, Gandy was a resident fellow at the Institute of Politics at the John F. Kennedy School of Government at Harvard University in Cambridge, Massachusetts. From January 2010 to October 2012 she was vice president and general counsel at the Feminist Majority Foundation in Arlington, Virginia.

Abusers are engineers and architects and janitors and police officers and any other walk of life. Th ...

It's always an uphill battle to defeat a Supreme Court nominee, but this is a fight worth having.

“[Gandy criticized the decision based on what is known about Roberts’ attitude towards women, bu ...

“She was so well-known in the civil rights community and so well-respected that it made a huge dif ...

“Most studies submitted to the FDA have been conducted by the manufacturers of implants who obviou ...

“If Bush chooses a nominee whose only intention is to scale back the rights we have fought decades ...

“Many of us think of her as one of the mothers of the modern women's movement. She played a very p ...

“That book changed women's lives. It opened women's minds to the idea that there actually might be ...

“Whether it's Vioxx or Bextra or silicone implants, the rule now is 'Buyer Beware,' ... The drug a ...

“He got the message loud and clear, didn't he?”

“He's a very smart lawyer and he's giving legalistic answers that are probably accurate. He doesn' ...

“Every answer he gives he gives himself a little out. It's frustrating to me as a lawyer to not be ...

“No on Justice John Roberts”

“None of these are easy questions. But most courts say it's not about what he did or didn't do or ...

Women don't even have equal treatment when it comes to filing a lawsuit for discrimination,