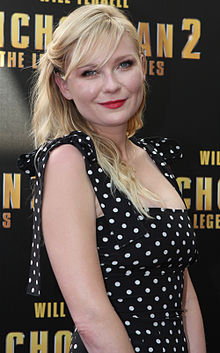 Kirsten Caroline Dunst (/?k?rst?n/; born April 30, 1982) is an American actress, singer and model. She made her film debut in Woody Allen's short film Oedipus Wrecks for the anthology film New York Stories (1989). At the age of twelve, Dunst gained widespread recognition as vampire Claudia in Interview with the Vampire (1994), a role for which she was nominated for a Golden Globe Award for Best Supporting Actress. She appeared in Little Women the same year and in Jumanji the following year. After a recurring role in the NBC medical drama ER (1996–97) as Charlie Chemingo and co-starring in films such as Wag the Dog (1997), Small Soldiers (1998) and The Virgin Suicides (1999), Dunst transitioned into romantic comedies and comedy-dramas, starring in Drop Dead Gorgeous (1999), Bring It On (2000), Get Over It and Crazy/Beautiful (both released in 2001).

You can never control who you fall in love with, even when you're in the most sad, confused time of ...

When I was little, I put on plays for my family at Sunday dinner, and I would direct them and have a ...

In high school I had a boyfriend who was super into rap, so I was into Too $hort and Wu-Tang for a l ...

I love to produce, and I've directed two short films.

Doing 'All Good Things' really felt like I was acting for myself rather than anyone else. It gave me ...

I'm a person who likes to hang out. I would never go on a blind date. That sounds like the most unco ...

Every movie I do, I always use things that have happened in my life. Funny moments, anything. If it ...

I've been lucky to find people who want to work with me, whom I respect and like, but the truth is t ...

I just want to be a good friend to people, that's all.

You don't really know who you're going to fall in love with at what time in their life. They can be ...

Confidence is very sexy. You could be not cute at all and have such confidence.

It's weird doing red carpets; it's uncomfortable. But you can have a sense of humor about it.

I've always had a process that I do before I even get to set or go to the location. I work privately ...