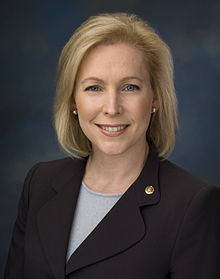 Kirsten Elizabeth Gillibrand (née Rutnik; /?k??rst?n ?d??l?brænd/ KEER-st?n JIL-?-brand; born December 9, 1966) is an American politician and the junior United States Senator from New York, in office since 2009. Previously, she served in the United States House of Representatives, representing New York's 20th congressional district (2007–09). She is a member of the Democratic Party.

If we expect our children to thrive at our colleges and universities, and succeed in our economy onc ...

Hardworking men and women deserve not only job security, but also a paycheck when they need to take ...

In addition to being an economic security issue, the failure to pay women a salary that's equal to m ...

While we can never truly repay the debt we owe our heroes, the least we should do for our brave vete ...

When I was first elected to the House in 2006, it was important to me to send a clear message to the ...

A strong and dedicated mentor can help a young woman get her foot in the door, get a promotion and g ...

When we create hope and opportunity in the lives of others, we allow love, decency and promise to tr ...

I love celebrating Mother's Day. Since I was a kid, it was a special day to tell my mother and grand ...

I believe transparency in government is key to restoring our nations faith in its elected leaders.

Like all Americans, I will never forget where I was the morning of the 9/11 attacks.

I had an amazing advantage: a grandmother [Polly Noonan, an influential confidante of the mayor of A ...

A strong mentor can help a young woman find and advance in the career of her dreams that otherwise m ...

The brave men and women who have served - and those who continue to serve - our armed forces have se ...

While we can't begin to repay the debt we owe our veterans for their brave service, we can certainly ...

America is the only high income nation without a paid family leave program. This means that if you o ...