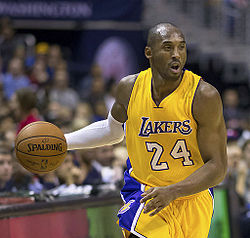 Kobe Bean Bryant (born August 23, 1978) is an American professional basketball player for the Los Angeles Lakers of the National Basketball Association (NBA). He entered the NBA directly from high school, and he has played for the Lakers his entire career, winning five NBA championships. Bryant is an 18-time All-Star, 15-time member of the All-NBA Team, and 12-time member of the All-Defensive team. He has led the league in scoring twice, and he ranks third on both the league's all-time regular season scoring and all-time postseason scoring lists. After beginning his 20th season with the Lakers in 2015–16, which set an NBA record for the most seasons with the same team, Bryant announced that he would retire after the season.

The most important thing is to try and inspire people so that they can be great in whatever they wan ...

We all know what flopping is when we see it. The stuff that you see is where guys aren't really gett ...

I can't relate to lazy people. We don't speak the same language. I don't understand you. I don't wan ...

Basketball is my refuge, my sanctuary. I go back to being a kid on the playground. When I get here, ...

I focus on one thing and one thing only - that's trying to win as many championships as I can.

What does perfection look like to me? Championship rings

People look at my competitive spirit, and they automatically attach it to the thing that's most simi ...

I'll do whatever it takes to win games, whether it's sitting on a bench waving a towel, handing a cu ...

I don't want to be the next Michael Jordan, I only want to be Kobe Bryant.

Dropkick Murphys get me going, Red Hot Chili Peppers, Nirvana... plus, all the regular hip-hop stuff ...

I was probably born a scorer, but I was made a winner. Whatever works, whatever wins championships, ...

Winning takes precedence over all. There's no gray area. No almosts.