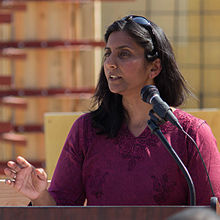 Kshama Sawant (/???m? s???w?nt/; born October 17, 1973) is an American socialist politician and member of Socialist Alternative who sits on the Seattle City Council. A former software engineer, Sawant became a part-time economics instructor in Seattle after immigrating to the United States. Sawant ran unsuccessfully for the Washington House of Representatives before winning her seat on the Seattle City Council. Sawant was the first socialist to win a citywide election in Seattle since Anna Louise Strong was elected to the School Board in 1916.

The workers should take over the factories, and shut down Boeing's profit-making machine,

We need a break from Capitalism,

Capitalism is based on ruthless exploitation and competition, and leads inevitably to the developmen ...

Big business has many tools to make us pay for the crisis of their system.

Today, we live in a world of incredible wealth and technology, alongside the most horrendous conditi ...

There is plenty of work to do, but big business isn't investing in rebuilding a green economy for th ...

This is what happens under capitalism - as long as corporations and the super rich own the economy a ...

Socialism is a society where the resources are used democratically to provide a better life for all, ...

On the basis of capitalism, victories like raising the minimum wage are only temporary.

What Bernie Sanders is calling for is incredibly important. Things like a $15/hour minimum wage, sin ...

Like the healthcare industry, the banks should be taken out of the hands of the 1% and brought under ...

For a whole historic period after World War II, US capitalism was the strongest in the world and cou ...

It's not just an economic crisis that capitalism has created. We also face an environmental catastro ...

Bernie Sanders has shown that socialism is no longer the barrier that it used to be during the Cold ...