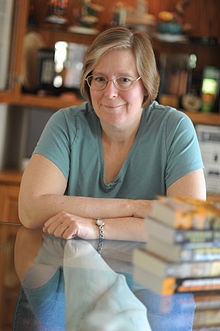 Lois McMaster Bujold (/bu???o?ld/ boo-ZHOHLD; born November 2, 1949) is an American speculative fiction writer. She is one of the most acclaimed writers in her field, having won the Hugo Award for best novel four times, matching Robert A. Heinlein's record, not counting his Retro Hugo. Her novella "The Mountains of Mourning" won both the Hugo Award and Nebula Award. In the fantasy genre, The Curse of Chalion won the Mythopoeic Award for Adult Literature and was nominated for the 2002 World Fantasy Award for best novel, and both her fourth Hugo Award and second Nebula Award were for Paladin of Souls. In 2011 she was awarded the Skylark Award. In 2013 she was awarded the Forry Award.

The dead cannot cry out for justice. It is a duty of the living to do so for them.

The world demands I make good choices on no information, and then blames my maidenhood for my mistak ...

I think 99 percent of women's lib comes from technology making different kinds of lives possible, an ...

Whether you function as welders or inspectors, the laws of physics are implacable lie-detectors. You ...

I've got forward momentum. There's no virtue in it. It's just a balancing act. I don't dare stop.

But pain... seems to me an insufficient reason not to embrace life. Being dead is quite painless. Pa ...

Change is possible.' 'Change is inevitable.

If power was an illusion, wasn't weakness necessarily one also?

Adversity does teach who your real friends are.

Aim high. You may still miss the target, but at least you won't shoot your foot off.

The Imperial Service could win a war without coffee, but would prefer not to have to.

Tej seemed such a sunny personality, much of the time--these flashes of dark were like a crack in th ...

Honesty is the only way with anyone, when you'll be so close as to be living inside each other's ski ...