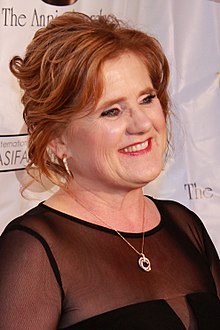 Nancy Jean Cartwright (born October 25, 1957) is an American voice actress, film and television actress, and comedian. She is known for her long-running role as Bart Simpson on the animated television series The Simpsons. Cartwright also voices other characters for the show, including Nelson Muntz, Ralph Wiggum, Todd Flanders, Kearney, and Database.

The Pledge of Allegiance does not end with Hail Satan.

Since September 11, security has been increased everywhere, and we have new IDs to get on to the Fox ...

I don't use the voice of Bart when I'm making love to my husband, but Marge's voice turns him on a l ...

“I will not get very far with this attitude”

“A trained ape could not teach gym”

“Grammar is not a time of waste”

“Christmas is the one time of year when people of all religions come together to worship Jesus Chr ...

“All he does is lie there like an unemployed whale.”

“Cursive writing does not mean what I think it does”

“I was not the inspiration for 'Kramer'”

“Wedgies are unhealthy for children and other living things”

“I will not expose the ignorance of the faculty”

“The Good Humor man can only be pushed so far”

“No one cares what my definition of "is" is”