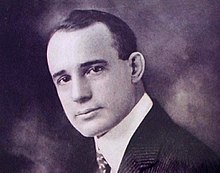 Napoleon Hill (October 26, 1883 – November 8, 1970) was an American author and impresario who cribbed freely from the new thought tradition of the previous century to become an early producer of personal-success literature. At the time of Hill's death in 1970, his best-known work, Think and Grow Rich (1937) had sold 20 million copies. Hill's works insisted that fervid expectations are essential to increasing one's income. Most of his books were promoted as expositing principles to achieve "success". Hill was an advisor to two presidents of the United States of America, Woodrow Wilson and Franklin Delano Roosevelt.

Think twice before you speak, because your words and influence will plant the seed of either success ...

The starting point of all achievement is desire.

Strength and growth come only through continuous effort and struggle.

Your big opportunity may be right where you are now.

Every adversity, every failure, every heartache carries with it the seed of an equal or greater bene ...

Cherish your visions and your dreams as they are the children of your soul, the blueprints of your u ...

Before success comes in any man's life, he's sure to meet with much temporary defeat and, perhaps so ...

Effort only fully releases its reward after a person refuses to quit.

Action is the real measure of intelligence.

It takes half your life before you discover life is a do-it-yourself project.

Happiness is found in doing, not merely possessing.

You can start right where you stand and apply the habit of going the extra mile by rendering more se ...

Patience, persistence and perspiration make an unbeatable combination for success.