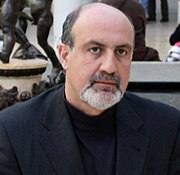 Nassim Nicholas Taleb (Arabic: ???? ????? ??????, alternatively Nessim or Nissim, born 1960) is a Lebanese-American essayist, scholar, statistician, former trader, and risk analyst, whose work focuses on problems of randomness, probability, and uncertainty. His 2007 book The Black Swan was described in a review by The Sunday Times as one of the twelve most influential books since World War II.

People have the problem of denial. This is one of the things I learned in Lebanon. Everybody who lef ...

Nature builds things that are antifragile. In the case of evolution, nature uses disorder to grow st ...

Most so-called writers keep writing and writing with the hope, some day, to find something to say.

The track record of economists in predicting events is monstrously bad. It is beyond simplification; ...

Individuals should think about the worst-case scenarios and plan for them. The world will be crazier ...

The next time you experience a blackout, take some solace by looking at the sky. You will not recogn ...

We humans lack imagination, to the point of not even knowing what tomorrow's important things will l ...

We know from chaos theory that even if you had a perfect model of the world, you'd need infinite pre ...

If you take risks and face your fate with dignity, there is nothing you can do that makes you small; ...

Charm is the ability to insult people without offending them; nerdiness the reverse

Intelligence consists in ignoring things that are irrelevant.

Don't aim to be perfect! Aim to be antifragile

They think that intelligence is about noticing things are relevant (detecting patterns); in a comple ...