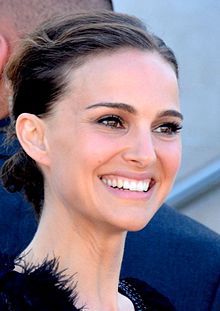 Natalie Portman (born Neta-Lee Hershlag; Hebrew: ???-?? ??????; June 9, 1981) is an actress, film producer and film director with dual American and Israeli citizenship. Her first role was in the 1994 action thriller Léon: The Professional, opposite Jean Reno, but mainstream success came when she was cast as Padmé Amidala in the Star Wars prequel trilogy (released in 1999, 2002 and 2005).

I like acting for now. But after seeing Apollo 13, what I really want to do is to be an astronaut. I ...

I don't think I've ever been in love, I'm sure I will be some day. I've had enormous crushes, althou ...

I'm not convinced about marriage. Divorce is so easy, and that fact that gay people are not allowed ...

Obviously it's much easier to say that you're going to follow your passions when you're financially ...

Breast implants gross me out. I don't think they're attractive at all.

You know, I get much more Jewish in Israel because I like the way that religion is done there.

I've stood up to producers before, and even a director. I saw them being abusive. A lot of people on ...

Young actors often don't think of the consequences of doing nudity or sex scenes. They want the role ...

There's always pressure, from other people and yourself. If you're happy with the looks you're born ...

I'd like it if people thought I was Jewish looking.

'Star Wars' hasn't changed my life at all.

When I was 7 years old, I put on shows for everyone at my grandpa's funeral. I was always the little ...

They tell me: 'OK, this is where we're going to push up your cleavage,' and I'm like, 'What cleavage ...

I'm always on the phone because I'm usually not with the people I want to be with.