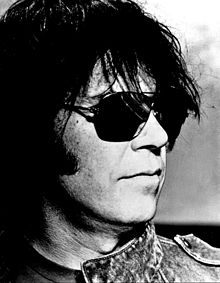 Neil Percival Young, OC OM (born November 12, 1945) is a Canadian singer-songwriter and musician. He began performing in a group covering Shadows instrumentals in Canada in 1960, before moving to California in 1966, where he co-founded the band Buffalo Springfield together with Stephen Stills and Richie Furay, and later joined Crosby, Stills & Nash in 1969. He released his first album in 1968 and has since forged a successful and acclaimed solo career, spanning over 45 years and 35 studio albums, with a continuous and uncompromizing exploration of musical styles. The Rock and Roll Hall of Fame website describes Young as "one of rock and roll's greatest songwriters and performers". He was inducted into the Hall of Fame twice, first as a solo artist in 1995, and second as a member of Buffalo Springfield in 1997.

With Crazy Horse, it's all one big, growing, smoldering sound, and I'm part of it. It's like gliding ...

I don't think that one day really relates to the next day in life.

I feel like I could be likened to an old hound circling on a rug for the last five years.

Studios are passe for me. I'd rather play in a garage, in a truck, or a rehearsal hall, a club, or a ...

Commitments are one of the worst things to have in the music business. They're very annoying.

The '60s was one of the first times the power of music was used by a generation to bind them togethe ...

There is a town in north Ontario, With dream comfort memory to spare, And in my mind I still need a ...

We need to spread out now in the universe. I think in 100 years we'll be living on other planets.

I don't think there is one president that's come down the line that hasn't done something good somew ...

I do not trust self-serving misinformation coming from corporations and their media trolls. I do not ...

I see a government completely out of control, and money is number one. Integrity isn't even on the m ...

Faith is not reason's labour, but repose.

Music is fulfilling. The next day you

Earth is a flower and it's pollinating.