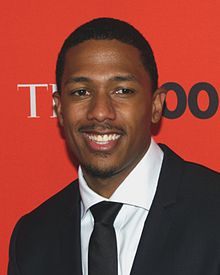 Nicholas Scott "Nick" Cannon (born October 8, 1980) is an American rapper, actor, comedian, entrepreneur, record producer, radio and television personality. On television, Cannon began as a teenager on All That before going on to host The Nick Cannon Show, Wild 'N Out, and America's Got Talent. He acted in the films Drumline, Love Don't Cost a Thing, and Roll Bounce. As a rapper he released his debut self-titled album in 2003 with the hit single "Gigolo", a collaboration with singer R. Kelly. In 2007 he played the role of the fictional footballer TJ Harper in the film Goal II: Living the Dream. In 2006, Cannon recorded the singles "Dime Piece" and "My Wife" for the planned album Stages, which was never released. Cannon married American R&B/pop singer, Mariah Carey in 2008. He filed for divorce in December 2014, after six years of marriage. The divorce was finalized in 2016.

To be compared to Will Smith is probably one of the coolest things because that's who I came up admi ...

Oh yeah, the preacher's kid has to be the baddest one. If everyone is smoking weed, we've got to smo ...

You have to be vigorous. That's the only way you are going to get it because everybody has dreams an ...

Mariah is a beautiful and talented person, and I've had a crush on her for as long as I can remember ...

I like underground rappers - Cory Gunz is a young kid that's been really doing his thing. I'm a Gym ...

To me, a forever love is a bond that can't be broken.

I'm not geeky but I have my geeky, corky moments, and then I've got some aspects of cool in me, I gu ...

Hunger is a deep concern of mine, and I feel that no one should go without food in this world as lon ...

The people who truly love me and loved me before all of this stuff. You can't ever leave them behind ...

I tell people 'America's Got Talent' is the best summer job you could have - you get to watch people ...

This is my chance to get out there and appease the fans of my music as well as show people that I do ...

Right now, I'm as single as a slice of American cheese.

When you don't have those types of things, fashion and all that stuff, it helps you find yourself be ...

I am always the first to say that fame and entertainment is one of the best and easiest occupations ...