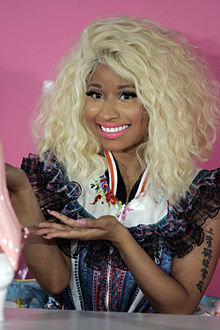 I've always been intrigued by color and by interesting hair. I was one of those weird little girls d ...

I don't want children cursing. I'm very strict on my nieces and my little brother. They have to list ...

My whole life is about being Nicki Minaj now. It's a never-ending saga.

I'm thinking of a legacy that I can be proud of and wealth that my grandchildren can use to go to co ...

Lavender is the new pink. I'll never stop wearing pink but I wanted to venture out.

My rule is, whatever you were calling me four years ago is what you should be calling me now, becaus ...

My wigs are ever changing in height, width, color, size. They make me feel happy. Wearing them makes ...

Like to me, I did the 'Harajuku' stuff. I did the crazy stuff. And now I kind of want to tone that b ...

I think a child may be the only thing that could give me true happiness.

When people see my makeup, they think all types of crazy things that I'm doing to my skin, but it's ...

I feel like my entire career and life, I've been judged by people who did not really know me. I defi ...