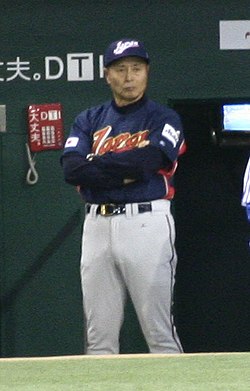 Sadaharu Oh (Japanese: ???, ? Sadaharu; born May 20, 1940), also known as Wang Chen-chih (Chinese: ???; pinyin: Wáng Zh?nzhì), is a retired Japanese–Chinese baseball player and manager who played 22 seasons for the Yomiuri Giants in Nippon Professional Baseball (NPB) from 1959 to 1980. Oh holds the world lifetime home run record, having hit 868 home runs during his professional career. He established many NPB batting records, including runs batted in (RBIs) (2,170), slugging percentage (.634), bases on balls (2,390), and on-base plus slugging (OPS) (1.080). In 1977, Sadaharu Oh became the first recipient of the People's Honour Award. He was inducted into the Japanese Baseball Hall of Fame in 1994.

I had strong legs that would have made me a good sumo wrestler and I used that to my advantage, but ...

I enjoy baseball more than anything and would like to be involved with it forever, but the reality i ...

The efforts you make will surely be rewarded. If not, then you are simply not ready to call them eff ...

“For Ichiro, it's his attitude.”

“He's only human and he can't be his best everyday.”

“The style of baseball between Cuba and Japan is very similar. The way they played the game (again ...

“In the past when the Cuban team was using the metal bats, we surely had a different style of base ...

“I believe this team is probably the strongest team Japan ever had against Cuba. We can show a gre ...

“One thing I can tell for sure is that we can show a great performance in Monday's game against th ...

“My players showed me a fantastic performance tonight. I know they're doing it for Japan.”

“The opponents and I are really one. My strength and skills only half of the equation. The other h ...

“The opponents and I are really one. My strength and skills only half of the equation. The other h ...