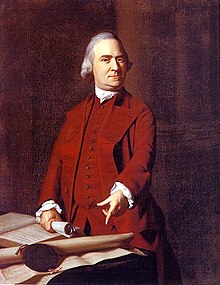 Samuel Adams (September 27 [O.S. September 16] 1722 – October 2, 1803) was an American statesman, political philosopher, and one of the Founding Fathers of the United States. As a politician in colonial Massachusetts, Adams was a leader of the movement that became the American Revolution, and was one of the architects of the principles of American republicanism that shaped the political culture of the United States. He was a second cousin to President John Adams.

The right to freedom is the gift of God Almighty....The rights of the Colonists as Christians may be ...

If ye love wealth better than liberty, the tranquility of servitude better than the animating contes ...

If men of wisdom and knowledge, of moderation and temperance, of patience, fortitude and perseveranc ...

Let us consider, brethren, we are struggling for our best birthrights and inheritance, which being i ...

Let each citizen remember at the moment he is offering his vote...that he is executing one of the mo ...

I thank God that I have lived to see my country independent and free. She may long enjoy her indepen ...

Give credit to whom credit due.

Rebellion against a king may be pardoned, or lightly punished, but the man who dares to rebel agains ...

Hence as a private man has a right to say what wages he will give in his private affairs, so has a C ...

He who is void of virtuous attachments in private life is, or very soon will be, void of all regard ...

In regard to religion, mutual toleration in the different professions thereof is what all good and c ...

If ever a time should come, when vain and aspiring men shall possess the highest seats in Government ...

The right to freedom being the gift of God, it is not in the power of man to alienate this gift and ...

No people ever yet groaned under the heavy yoke of slavery, but when they deserv'd it. ...The truth ...

[T]he importance of piety and religion; of industry and frugality; of prudence, economy, regularity ...