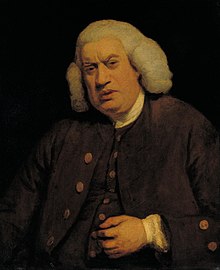 Samuel Johnson (18 September 1709 [O.S. 7 September] – 13 December 1784), often referred to as Dr Johnson, was an English writer who made lasting contributions to English literature as a poet, essayist, moralist, literary critic, biographer, editor and lexicographer. Johnson was a devout Anglican and committed Tory, and has been described as "arguably the most distinguished man of letters in English history". He is also the subject of "the most famous single biographical work in the whole of literature," James Boswell's Life of Samuel Johnson.

The true measure of a man is how he treats someone who can do him absolutely no good.

If your determination is fixed, I do not counsel you to despair. Few things are impossible to dilige ...

My dear friend, clear your mind of cant.

One of the disadvantages of wine is that it makes a man mistake words for thoughts.

Kindness is in our power, even when fondness is not.

It is better to suffer wrong than to do it, and happier to be sometimes cheated than not to trust.

The return of my birthday, if I remember it, fills me with thoughts which it seems to be the general ...

What is easy is seldom excellent.

Knowledge is of two kinds. We know a subject ourselves, or we know where we can find information upo ...

I had rather see the portrait of a dog that I know, than all the allegorical paintings they can show ...

I would not give half a guinea to live under one form of government other than another. It is of no ...

The longer we live the more we think and the higher the value we put on friendship and tenderness to ...

The mind is refrigerated by interruption; the thoughts are diverted from the principle subject; the ...

We may have uneasy feelings for seeing a creature in distress without pity; for we have not pity unl ...