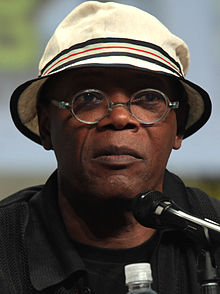 My dad was an absentee dad, so it was always important to me that I was part of my daughter's life, ...

I never had one beer. If I bought a six-pack of beer, I kept drinking till all six beers were gone. ...

Michelle Obama is Superwoman. What can't she do? That's why people love her. She can be on the Supre ...

Long Kiss Goodnight has a huge cult following. They could make another version of that movie right n ...

I grew up in the South with guns everywhere and we never shot anyone. This [shooting] is about peopl ...

Anyone who tells you money can't buy happiness never had any.

I sit at home and read books. I watch movies. I watch television. I go and play golf. I don't go to ...

I actually think I have an audience member's sensibility about going to the movies.

The [Oregon] Journal in its head and heart will stand for the people, be truly Democratic and free f ...

I guess the worst day I have had was when I had to stand up in rehab in front of my wife and daughte ...

We've come a long way in our thinking, but also in our moral decay. I can't imagine Dr. King watchin ...

I'm actually very ordinary, except people get to pay their money to come watch me work. The same way ...

Girl, don't make me put my foot in your ass.