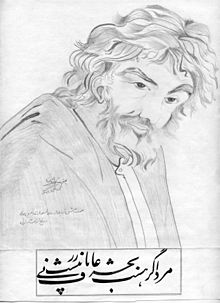 Shams-i-Tabr?z? (Persian: ??? ????????) or Shams al-Din Mohammad (1185–1248) was a Persian Muslim, who is credited as the spiritual instructor of Mewl?n? Jal?l ad-D?n Muhammad Balkhi, also known as Rumi and is referenced with great reverence in Rumi’s poetic collection, in particular Diwan-i Shams-i Tabr?z? (The Works of Shams of Tabriz). Tradition holds that Shams taught Rumi in seclusion in Konya for a period of forty days, before fleeing for Damascus. The tomb of Shams-i Tabr?z? was recently nominated to be a UNESCO World Heritage Site.

The real dirt is not outside, but inside, in our hearts. We can wash all stains with water. The only ...

You can study God through everything and everyone in the universe, because God is not confined in a ...

You can be everything in life but the important thing is to be a good person.

Wherever you go, east, west, north or south, think of it as a journey into yourself! The one who tra ...

To get closer to Truth and Right, we need a beautiful and soft heart.

A life without love is a waste. 'Should I look for spiritual love, or material, or physical love?', ...

If you look around, you can find a face of God in each thing, because He is not hidden in a church, ...

Intellect takes you to the door, but it doesn't take you into the house.

You have to live with the people in hypocrisy for them to stay happy with you.

The quest for Love changes us. There is no seeker among those who search for Love who has not mature ...

For anew Self to be born, hardship is necessary. Just as clay needs to go through intense heat to be ...

To get closer to Truth and Right, we need a beautiful and soft heart. Every human learns one day or ...

Alms in secret extinguish the wrath of the Lord means you are so immersed in sincerity and in preser ...

Do not worry about tricks and cheaters. If some people are trying to trap and hurt you, Allah is als ...