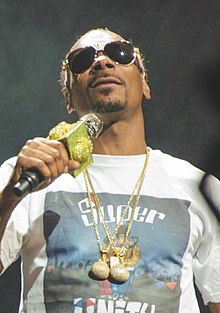 Cordozar Calvin Broadus, Jr. (born October 20, 1971), known professionally as Snoop Dogg (sometimes shortened to Snoop and formerly called Snoop Doggy Dogg and Snoop Lion), is an American rapper and actor from Long Beach, California. His music career began in 1992 when he was discovered by Dr. Dre of N.W.A, and as a result was prominently featured throughout Dr. Dre's solo debut album, The Chronic (1992). He has since sold over twenty-three million albums in the United States and thirty-five million albums worldwide.

When I heard the royal family wanted to have me perform in celebration of Prince William's marriage, ...

I wanted to become a better Snoop Dogg, full of water, proteins and stuff to keep me alive . . . lol ...

I learned how to take other people's mechanisms of promoting their stuff through me as opposed to pr ...

I have always said I was Bob Marley reincarnated,

I was like the class clown in school so I guess I would say I did like the attention. In church I di ...

Well, hip-hop is what makes the world go around.

Nobody cared about the riot until they thought it might spill into their nice neighborhoods. Then th ...

Look at music for what it's worth around the world and not just America. In other countries, people ...

When I'm not longer rapping, I want to open up an ice cream parlor and call myself Scoop Dogg.

My younger son, Cordell, aka Lil Snoop, loves me like a fan loves Snoop Dogg. He's inspired by makin ...

Rollin' down the street, smokin' indo, sippin' on gin an juice Lay back with my mind on my money and ...

Everybody wants to be a winner. Winning for you is everything, right? Wrong, winning is the only thi ...

Trump says he wants to run for president. Why not? It wouldn't be the first time he pushed a black f ...

Sometimes a loss is the best thing that can happen. It teaches you what you should have done next ti ...